Treed by a Dead Bear

1872: Near the White House Dairy, on Steele's ranch, near Pigeon Point, a monster grizzly bear had killed a cow. Mr. B[arzilla] M. Scofield, the owner of the cow, placed a bucket of syrup, well poisoned with strychnine, near the place where the cow had been killed. 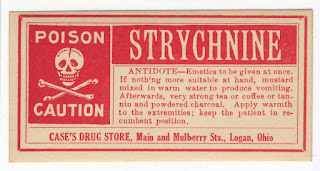 The next night the bear came back and ate the syrup and died on the spot.

In the morning a group of people, including a Chris Coffin, a teamster, approached the spot. They saw the bear quietly sleeping near the place where the poison had been left. The whole party were seized with fright that they were so close to a such a  huge a monster, (he was about twelve hundred pounds) and Chris, hurriedly climbed a tree near by, while the rest of them made their escape, running as fast as they could, thinking the bear was at their heels.

Hours passed and the bear failed to wake up. Chris first ventured a whistle, but that did not wake him so then he gave a huge bark, like a dog, this did not move him.

So Chris came to the conclusion that the bear had eaten too much and was very fast asleep. So he slowly climbed down.

How do you think he felt on finding that the bear was dead, not asleep after all, after spending so long in the tree?

As reported by the Santa Cruz Weekly Sentinel: "Chris. Says [sic] the balance of the company have not returned yet, so badly were they frightened at the sight of the dead bear."

Circa 1850s: There are several versions of this story that have been recounted over the years. This is as told by Richard C. Kirby, local tanner and husband of libertarian Georgiana Bruce Kirby, to Caroline H. Dall and published by her in My First Holiday, 1881:

"We drove by the old tannery once kept by Paul Sweet. When Mr. K. first came to it, great grizzly bears, each weighing from eight hundred to a thousand pounds, used to steal into the cattle-yard every night. On one occasion one of these creatures caught a calf by the nape of the neck, and leaped a tall fence. A revolver was fired, but the animal dropped the dead calf and escaped. The next day they followed the bear with hounds, and took him.


One day Paul met a grizzly bear with cubs, in the wood. She caught him by the waistband, plunged into a hollow, dug a large hole in the sand, and buried Paul out of sight. After a while the tanner worked his way up to the surface, but Mistress Grizzly was watching. She darted forward, and snugly tucked him in with two or three strokes of her big paw. This time Paul was more wary. The sand was loose, and after the creature had gone off to her cubs, he crawled home entirely unhurt."

You can read more about Paul Sweet by clicking here.

Posted by lisaar at 8:53 PM No comments:

In 1864, Waddell’s Creek was also known as Casa del Ursa. Ursa being Latin for Bear, Casa being Cottage. It was named for the large number of grizzlies that lived in the area.

"Waddell’s Mill – W. W. Waddell & Co. of Santa Cruz have been engaged, for more than two years last past in the extensive preparations for manufacturing lumber. Their situation is below New Year’s Point (punta den ano nueve) on the Casa del Ursa, more familiarly known as Waddell’s creek."


Later it became Rancho Del Oso (Spanish for Bear Ranch) and is now part of Big Basin Redwoods State Park. The Rancho del Oso Nature and History Center has on display a grizzly bear that was shot with a bow and arrow in the Yellowstone area by Arthur Young on a special expedition with Saxton Pope to secure a group of grizzlies for display at the California Academy of Sciences in 1920.

The bear weighed nearly 1000 pounds when it was shot and skinned. The kill was documented in the book Hunting with the Bow and Arrow by Saxton Pope:

"Next day, just at sunset, we got our first view of the great bear of Dunraven Pass. He was coming down a distant canyon trail. He looked like a giant in the twilight. With long swinging strides he threw himself impetuously down the mountainside. Great power was in every movement. He was magnificent!"

"... the monster grizzly was romping back and forth in the shaded forest not more than sixty-five yards away. With deep booming growls like distant thunder, he voiced his anger and intent to kill. As he flitted between the shadows of the trees, the moonlight glinted on his massive body; he was enormous.

Young discharged three arrows at him. I shot two. We should have landed, he was so large. But he galloped off and I saw my last arrow at the point blank range of seventy-five yards, fall between his legs. He was gone. We thought we had missed the beast and grief descended heavy upon us. The thought of all the weary days and nights of hunting and waiting, and now to have lost him, was very painful."


"... We had no idea that we hit the great bear, but just to gather up our shafts, we went over the ground where he had been.

One of Young's arrows was missing! That gave us a thrill; perhaps we had hit him after all! We went further in the direction he had gone; there was a trace of blood.

"... We let ourselves down the sheer descent, came upon a narrow little ledge, and there below us lay the huge monster on his back, against a boulder, cold and stiff, as dead as Caesar. Our hearts nearly burst with happiness.


There lay the largest grizzly bear in Wyoming, dead at our feet. His rugged coat was matted with blood. Well back in his chest the arrow wound showed clear. I measured him; twenty-six inches of bear had been pierced through and through. One arrow killed him. He was tremendous. His great wide head; his worn, glistening teeth; his massive arms; his vast, ponderous feet and long curved claws; all were there. He was a wonderful beast. It seemed incredible. I thumped Young on the shoulder: 'My, that was a marvelous shot!'"

The first mail was brought to Santa Cruz on horseback over the mountains from Santa Clara in the winter of [18]'50. The mail consisted of one letter and two newspapers.... We hadn't enough mail to put in a bag until we began to receive a regular mail once a week in [18]'51. When the news was heard of a steamer arriving in San Francisco with the Eastern mail the whole white population waited anxiously for the mail, which brought them news from home and friends.


Lard & Davis had the first contract to carry the mail. This was in '51. Lard's boy, who carried the mail on a mule, once, while coming over the mountains, ran down a cub or young bear. He tried to make the cub come out, but couldn't make it do so. The mail bag was lashed to the saddle, you see, and when the young Lard whipped up the mule, the old bear, who was watching the proceedings, came after him. The boy heard the bear coming, and gave one glance around and then put the spurs to the mule. The bear gained on him and when near enough sprang on the mule's back, scraping the flesh off and taking the mail bag. I tell you when the boy reached town he was as pale as a ghost and frightened almost out of his wits. Well, to cut the story short, we sent a man back to find what mail the bear was kind enough to leave. The strangest thing of all, was that the man returned with the mail, but he reported that the bear had "chawed up" the leather bag and did not damage the mail.

Posted by lisaar at 5:06 PM No comments: